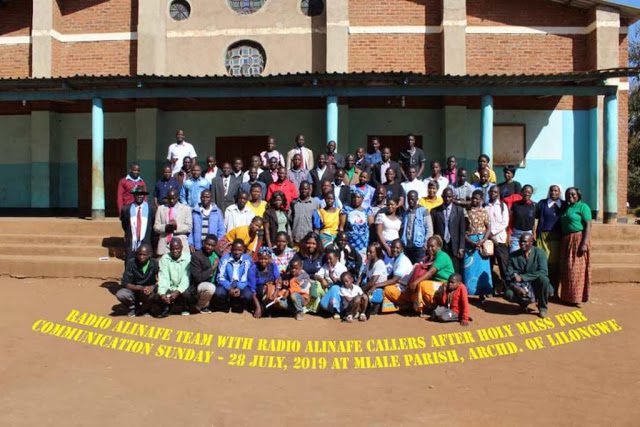 Under the theme We are members of one another” (Eph 4:25) From social network communities to the human community, this year’s National Communications commemorations in Malawi took place on July 28, 2019 at Mlare Parish in the Diocese of Chikwawa.

But the theme, Pope Francis has emphasized the importance of giving back to communication a broader perspective based on the person, stressing the value of interaction and dialogue and as an opportunity to meet with others.

On the occasion, Radio Alinafe of the Archdiocese of Lilongwe interacted with its listeners. Over 50 radio callers/listeners from various denominations including non-Catholic pastors and traditional leaders attended the event that was publicized for over two weeks on the same radio.

Speaking on behalf of the listeners, Mr. Totomoyo thanked the management of Radio Alinafe for inviting them to interact with its radio personalities face to face.

“This is an interesting occasion. We can see those people that speak to us, take our calls but we never met physically. We are happy to see you physically and we hope you are also happy to interact with us,” said Totomoyo.

The radio callers presented their views on how best to improve some of the programs at the radio station.

On his part, Fr. Louis Chikanya, the Communications Director for the Archdiocese and Director of the Radio Alinafe, thanked the listeners for taking their time to interact with them. He assured them that what they have requested through their feedback will definitely be considered.

In his homily during Mass, Fr. Louis Chikanya asked the Christians to refrain from falsehood that is manifested in the social media as called upon by the Holy See in his message on the commemoration of the 2019 World Social Communications Day (WSCD).

Fr. Louis argued that it is easier to lie on social media but very difficult to lie in a physical encounter.

“The Pope’s message calls upon all of us to reflect on the metaphor of the net, which was the basis of the term ‘Internet’; to rediscover its positive potential. The Pope’s message further asserts that a community as a network of solidarity requires mutual listening and dialogue, based on the responsible use of language,” he said.

In the afternoon, the radio station had a special phone-in program in which the participants to the 2019 World Social Communications Day interacted with the radio presenters. They expressed gratitude for being at the event and wished it could be an annual event for them.

Communications Sunday started in 1967, following the 1962 to 1965 Church Fathers’ Council II commonly known as Vatican Council II during which the decree Inter Mirifica about the use of the mans of social communications in the modern world, was issued.